Calgary, 4 July 2022 – The Philippine Consulate General (PCG) in Calgary conducted its second consular outreach mission for the year by providing services for the members of the Filipino community in Grande Prairie, Alberta, and the surrounding region of Peace River Country last 28-30 June 2022.

A team headed by Deputy Consul General Victorio M. Dimagiba, Jr. was able to render a total of 553 consular services for the Filipinos in Grande Prairie and other parts of northwestern Alberta during a period of three days.

The Philippine Consulate General was able to process 364 passports and 157 non-passport services. Thirty-two (32) applicants also took their oaths as Filipino citizens under RA 9225.

In addition, the Office of Social Security Services (SSS) in Calgary was able to attend to the applications and queries of 87 SSS members.

Representatives from the Philippine Overseas Labor Office in Vancouver, which also has jurisdiction over Alberta and Saskatchewan, took part in the consular outreach mission. They responded to various queries related to the verification of labor contracts, renewal of OWWA membership, and receipt and review of manpower request/job order. Likewise, they were able to visit a prospective job site in Grand Prairie for Filipino temporary foreign workers. 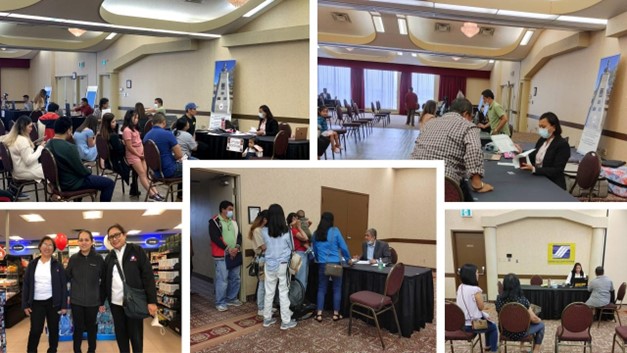 Scenes from the consular mission conducted by the Philippine Consulate General, Calgary, SSS – Calgary and POLO – Vancouver from 28 to 30 June 2022 in Grande Prairie, Alberta.

There are an estimated 3,200 Filipinos in Grande Prairie, accounting for about 5% of the city’s total population based on Statistics Canada’s 2016 census. END.