Calgary, 14 October 2022 – Six days after the landmark Philippines-Alberta MOU on the Recruitment of Filipino Nurses was signed on 6 October 2002, the Philippine Consulate General (PCG) in Calgary, in cooperation with the Philippine Overseas Labor Office (POLO) in Vancouver, successfully conducted an online briefing where the key provisions of the MOU were explained to the public.

Undersecretary Patricia Yvonne Caunan of the Philippine Department of Migrant Workers and then Alberta Premier Jason Kenney signed the MOU.

During the briefing, which was attended by 266 participants from the Philippines, Alberta and other parts of Canada, and other countries, Consul General Zaldy Patron and Labor Attaché Jainal Rasul provided more details on the major provisions of the MOU.

The topics discussed covered the streamlining of the accreditation and licensing processes for the Filipino internationally educated nurses (IEN) in Alberta; the introduction of the Nurse Navigator Platform by Alberta; the greater access to Alberta’s nursing bridging program and its potential delivery in the Philippines through accredited institutions; the financial assistance available for the Filipino IEN in Alberta; and the government-to-government recruitment of Filipino nurses from the Philippines.

Further, Consul General Patron and Labor Attaché Rasul explained the next steps that will be undertaken in the implementation of the MOU.

On 6 October, the Alberta Government announced a financial assistance program worth CAD 3.5 million to open more opportunities for the IEN in Alberta. 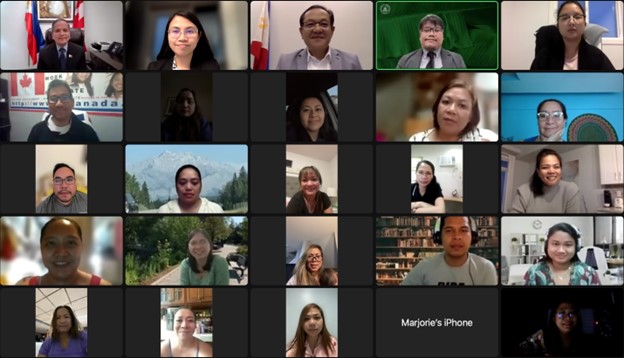 Consul General Zaldy B. Patron (Top Row, 1st from left) and Labor Attaché Jainal Rasul (Top Row, center) with some of the participants in the webinar. (Calgary PCG).

The briefing was capped by a question-and-answer segment, where Consul General Patron and Labor Attaché Rasul answered the specific questions of the audience.

The video of the briefing is now available on the PCG’s Facebook page to increase the public’s understanding of the MOU.

The public is advised to follow and continuously monitor the social media pages and websites of both the PCG Calgary and the Alberta Government for future announcements on the MOU’s implementation.