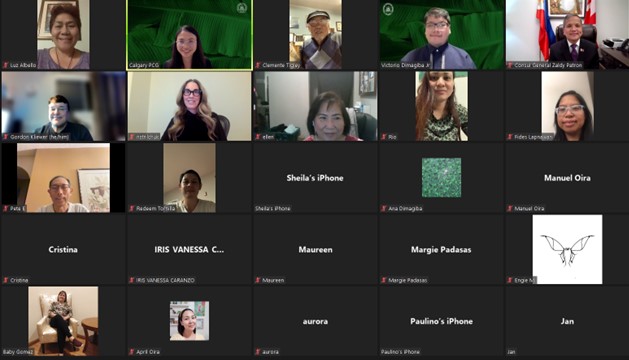 Calgary, 6 December 2022 – The Philippine Consulate General (PCG) in Calgary, in cooperation with Alberta Health Services (AHS), conducted “Breathe… A Webinar on Lung Cancer Awareness” on 24 November 2022 as part of the PCG’s Gender and Development program for 2022 and in observance of the Lung Cancer Month.

Consul General Zaldy B. Patron, in his welcome remarks, cited the report of the Lung Center of the Philippines that lung cancer is the most common form of cancer in the Philippines and the number one cause of mortality.

“Through this webinar, we would like to make the Filipinos in Canada, especially those under the PCG’s jurisdiction in Alberta and Saskatchewan, aware of the symptoms of lung cancer as well as the treatments and early detection methods or screenings for lung cancer,” he said.

A special attention was given to the Filipino women since women unknowingly, by the nature of their tasks at home, are exposed to various elements and chemicals from beauty, cooking and cleaning products to substances on the clothes of their family members that could expose them to cancer. This is in addition to the everyday pollution and other substances they could come in contact with at work.

AHS representatives Ms. Nadine Strilchuk and Mr. Gordon Kliewer discussed the various causes of lung cancer, its symptoms, and the types of person more prone to contracting the disease.

They explained the pilot screening program of AHS for the early detection of lung cancer, which was rolled out this year and will last until 2024 with only three primary care networks in the province participating at this time. For more information, please go to https://screeningforlife.ca/lung/.

Both Ms. Strilchuk and Mr. Kliewer emphasized the importance of early detection and how this can increase the chances of a patient’s survival since there are more treatment options available to patients in the early stages of cancer.